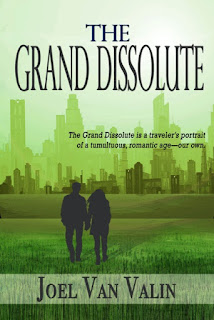 The year is 1998 and Jimmy Pagley is falling in love—with a pretty, foreign cafe waitress named Haydee. What he doesn't know is that Haydee is a temvelar, a time traveler from the 29th century, on a mission to find her old mentor. Soon Jimmy and Haydee find themselves caught up in a dark conspiracy of rogue temvelars and government agents, on a search that leads through airports and space stations, art museums and suburban bakyards, Greek temples and Medieval castles, and beyond time itself. The Grand Dissolute is a traveler's portrait of a tumultuous, romantic age—our own. 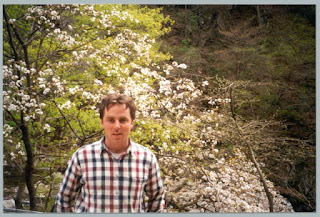 Joel Van Valin is the author of the fantasy novel, The Flower of Clear Burning and the publisher of Whistling Shade literary journal.  He lives with his wife Lisa, a veterinarian, in St. Paul.

Jimmy Pagley. A young veterinarian in St. Paul, Minnesota circa 1998. He has a crush on a cafe waitress named Haydee. What he doesn’t realize is that Haydee is really a time traveler from the future.
Haydee Trebes. A temvelar, or time traveler from the 29th century, currently under cover in 20th century America (known as “The Grand Dissolute”). Temvelars are not supposed to have relationships with the natives they are studying, and so Haydee tries to ignore her feelings for Jimmy.
Joachim Six. Haydee’s mentor and the director of the temvelar field office in late 20th century St. Paul. His disappearance prompts Haydee to enlist Jimmy’s help in finding Joachim.

Toma Bolingbroke. A friend of Haydee’s father, who often advises her. He works in the Time Ministry on planet Tarrymore, Haydee’s home planet.
Deneb. Haydee’s best friend on Tarrymore, who teaches at a school.
Chauncy and Zela. Haydee’s sister and niece, who also live on Tarrymore.
Helena Brown. The new director of the Time Ministry in the 29th century. Her efforts to rein in the powers of the temvelars out in the field has caused a backlash within the ministry.
Letitia Beringause. A temporal engineer on Tarrymore who has recently disappeared. She turns up in 20th century St. Paul, and is not the friendliest gal to deal with.
Eliot Eflan. Another citizen of Tarrymore who has recently disappeared. He has a facility with languages.
Lauro Rain. The town constable on Tarrymore. Investigating the disappearance of Letitia and Eliot, he and Toma begin to realize it is related to the missing Joachim Six.
General Barzov. Head of Security in the Time Ministry. Commonly known as Time Cops, his unit hunts down and apprehends temvelars who have “gone native” in their historical era.

Pixie. A waitress at the Run for Your Money cafe, and Haydee’s friend.
Marissa and Dix: Haydee’s field technicians in 20th century St. Paul. They operate the time theater in the back room of a picture frame shop and monitor Haydee’s movements for any dangers from causality.
Cousins. Jimmy’s best friend, and a left-wing political activist.
Chas, Amy, Bob. Other college friends of Jimmy’s, who are often seen partying.
Undset. A government agent, the head of a mysterious department called Lost and Found. He spends time playing golf and grilling for his suburban family.
Wordihoff. An underling of Undset’s, often seen in the company of Letitia Beringause.
Rob. A private investigator and baseball fan. He spends a lot of time on stakeouts in his car investigating insurance fraud. His boss, Miller, assigns him to spy on Haydee.
Billie. A wife and mother of two in Bakersfield, California, who bought a pretty drinking goblet at a garage sale, not realizing it originated in Ancient Greece. Joachim Six had been tracing the cup back through time shortly before he disappeared.
Joe Broderson. A resident of Wakefield, Nebraska, whose grandmother owned the drinking goblet before Billie.
The Whistler. A powerful being who is the gardener of the Castle, a strange place under the river of time.


The Whistler – Christopher Walkin (The Deerhunter)