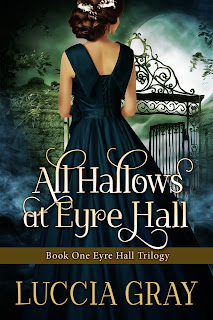 Twenty-two years after her marriage to Edward Rochester, Jane Eyre is coping with the imminent death of her bedridden husband. while Richard Mason has returned from Jamaica, revealing unspeakable secrets once again, and drawing Jane into a complex and malevolent conspiracy.
Experience the mystery and magic of a Victorian, Gothic Romance set in Eyre Hall, the mansion Jane Eyre rebuilt after her marriage to Edward Rochester, and rediscover the allure of the mature Jane Eyre. You will encounter suspense, secrets, lies, villains, love, ghosts of the past, and a sinister sin-eater in this absorbing narrative.

Luccia Gray was born and brought up in London, where she graduated in Modern Foreign Languages. She currently lives in the south of Spain with her husband and her dog. She has three children and three grandchildren, who visit often. When she's not reading or writing, she's teaching English at an Adult Education Centre, or lecturing at the UNED (Spanish Distance University).

Q and A with the Author

When did you know you wanted to write books?

I’ve always known I would be a writer, but life got in the way! I graduated in modern foreign languages from Westfield College, London, moved to Spain, got married, and started working as a teacher. Soon after I had children, and there was never enough time. I started writing in my fifties, once my children had left home and started their own lives. I don’t regret taking my time to embark on my career as an author. Life isn’t a race to the finish line, it’s a journey to be experienced. I’m here now and I have a story to tell. That’s what counts.

What does your writing process look like?
I have a plan or outline in my mind, which I jot down and expand until I’m satisfied that my story actually exists. Once the story’s there, I plan my plot arc. There are many plot outlining techniques which can be very helpful for an author to plan her novel. This way has worked for me so far. My novels fall into three acts with about ten scenes in each act. These three parts correspond to:

a) The exposition, where the characters, setting, and the conflict are presented.

b) Secondly the characters deal with the conflict, and often more complications arise, although part two often ends in an optimistic note as at least some of the conflict seems to have a solution.

c) The third part leads to the final outcome, which can be positive or negative or a mixture, but there are more unexpected challenges before the end.

I write the scenes without following the chronological order.  I need to see the scenes before I can write them. I see the characters, where they are, what they are doing and thinking. I work through the scenes in my mind several times as I go for a walk, or sometimes I talk it through aloud to myself or with someone who is very close to me, and I take handwritten notes. Once I sit at my computer, the scene usually flows easily. The hard work starts after that, as I edit and tie up the different scenes in the novel.

Drawn again like a magnet, I cupped his face in my hands, brushed my lips against his cheek and whispered in his ear. “Please, Michael, do not look at me like that when anyone else is watching.” I forced myself to break away and flew out of the room.

“You are like a hidden treasure. You were right next to me for years, but I had never really seen you.”
He held me tighter in silence. I had almost relaxed into slumber, when he spoke softly into my hair. “I knew you were the brightest jewel in the world the first day I saw you.”

“Michael, would you hand this letter to Mr. Raven and accompany him to the fireplace while he burns it, please?”
“Gladly, madam.”


I watched as both men approached the small fireplace, and sighed in relief as the flames destroyed the wicked words and sinful deeds described on the worn parchment.