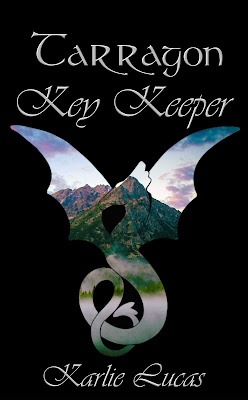 For hundreds of years, the gates of Tarragon have been sealed from the outside. Prophecy speaks of the day the last Key Keeper will return and wake the dragons from their spell-cast slumber, returning them to their rightful home.
Seeking to fulfill her father's dying wish, Anwen Porter travels to the Drakonii Mountains where she meets Tyler, a mysterious local with a secret. With his help, she learns more about her clouded past and her own abilities. But when Courtney, a lovesick mage, tries to insert herself into their plans, things begin to go horribly wrong.
With death threatening at every turn, Anwen must learn to rely on her newfound friends to survive. But how can she unravel the mystery of her heritage when everything is trying to kill her?

Snippet 3: “When are you going to tell her?”
Tyler opened his eyes at Courtney's question. “Tell her what, exactly?”
Courtney didn't meet his eyes as she rummaged in her pack for something to munch on. “About what you are.” She pulled out a packet of granola and opened it.
Tyler's eyes went amber for a brief moment, but returned to their usual blue. “I don't know. One thing at a time, I guess. She's already been through a lot. I don't want to overwhelm her.”
“A bit late for that, don't you think,” Courtney understated with a roll of her eyes. “She's been attacked, knocked out, drowned, and who knows what else. I’m sure hearing you're a dragon will hardly make a dent in the bucket, if you know what I mean.”
Tyler smiled at that. “True. But what if I’m not ready to tell her?”