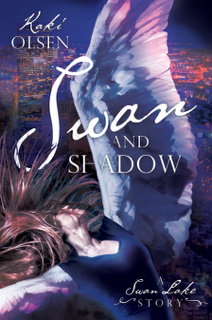 "Aislin is cursed. A regular college student at night and a swan during the day, Aislin can only break the curse by finding her true love. But when her beloved discovers the truth, will his fear override their love? This modern adaptation of Swan Lake will help you discover what love really means." 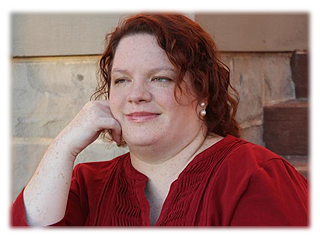 Kaki Olsen is always on the brink of another adventure. If she couldn't be a writer, she'd be a full-time musician or travel guide and she would take her lunch breaks at Fenway Park. Until that happens, she speaks both Spanish and English at her every-day office job, but she has vacationed enthusiastically in such places as Istanbul and Ireland. She has lived in five states, but will always refer to Boston as home.

She regularly contributes academic papers on zombies or wizards to Life, the Universe and Everything, a sci-fi/fantasy symposium originated at her alma mater, Brigham Young University. Her published works have appeared in such magazines as Voices and AuthorsPublish.

She is a doting aunt and librarian of two bulging bookshelves.


5.      When did you start writing, and was there a specific event or person who influenced you to become an author?  I started writing when I was 7 and still have the crappy little fairy tale that I wrote then--The Princess Who Never Smiled.  In 9th grade, I had a teacher who was so frustrated by my work that she told me I was never going to be intelligent enough to understand literature.  The next paper I wrote was on Elie Wiesel's Night.  I read that book in the corner of a train station in Boston and cried for the last half of it.  When I got my paper back, that same teacher had given me an A.  I never got anything else in the rest of my classes with her and she left for a new job the same year that I transferred schools.  When it came for me to apply to schools, she told Brigham Young University that I was the most talented writer she'd taught and that if they didn't want me, she would convince me to apply to Harvard where she taught.  They let me in.

6.      Are you currently working on a project, and if so, can you tell us anything about it?   I'm currently working on a million.  I have 55 plots running around in my head and am usually actively researching or developing at least 5.  The novels I'm writing are The Matchmaker's Apprentice (The third son of a royal family finds himself suddenly heir to the throne and has to find a bride with the help of local matchmakers) and Scions and Saints (A girl is orphaned at eight and grows up determined to join the war against her parents' murderers; meanwhile, her mother is the unwilling leader of the revolution that her husband started ten years ago before he faked their deaths).  I'm writing a novella called Check-in about a possessed phone whose ghost tries to save a kidnapped girl's life.  I have two short stories--Just One Chance (A dragon-smuggling android discovers that she miscalculated the flight time to the destination when her cargo starts to hatch) and Birdsong From A Forgotten World (A 15-year-old French girl joins her family on a ship heading to a new colony world as the only violinist going into space).  I'm also editing The Deserter, which is best described as what would happen if Harry Potter disappeared, the Death Eaters and the Order of the Phoenix were tracking him down and the last person to see him alive was Hermione, who has forgotten that he ever existed.  Like I said, I have a million things to wrap up.

I think it's inevitable that every high school student read Kafka's The Metamorphosis.  Gregor Samsa, a traveling salesman, wakes up one day as a giant cockroach.  He tries to normal life, even when everything's changed.  He can't work or go out.  He can't find joy in things that used to make him happy.  He overhears conversations about what a burden he is to the rest of the family.  Eventually, he allows himself to die to put an end to that.

In all of Aislin's years of homeschooling, I only asked to change the curriculum once.  When Mom mentally replaced Gregor with Aislin, she removed it from the planned reading list without further argument

It may be just a story, but I've seen some of the guilt Aislin feels for the circumstances she didn't ask for.  If anyone in this world knew what it was to wake up one day with a different life, it would be her.

Aislin has always said that I try to compensate for her lack of a life with my own activities.  She scoffs at my attempts to keep her life normal, but I would rather risk her scorn than let her believe that she has nothing to contribute to our lives.

As far as I know, Aislin has never read that novella, but I'm sure that she knows the story too well.