My Fair Lacey and a Perfect Fit Review 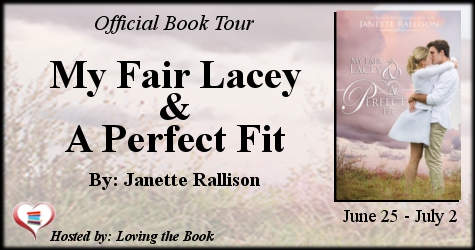 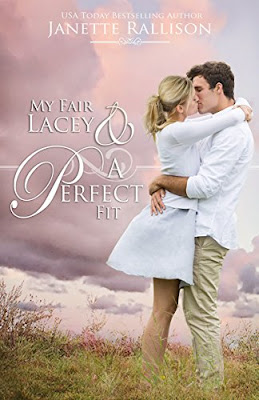 Lacey has dreamed of opening a restaurant for years - but first, she needs a loan. When Garrett Halifax, her roommate's Harvard-educated brother, offers to help her clean up her appearance and manner to impress the bank manager, she jumps at the chance. She makes mistake after mistake, and perhaps the biggest mistake is falling for sexy Garret.

This modern retelling of My Fair Lady offers all the humor of the original movie with a splash of romance thrown in.

Jojo Halifax, Lacey's roommate, believes that winning Echo Ridge's float competition is just what her fledgling art career needs. And if that means giving her ex-boyfriend, Anthony, a second chance so she can be a designer on his team, well, she's willing to make the sacrifice. But when a lost bet leads to a blind date with her brother's friend, Wyatt, she begins to have second thoughts about second chances. Wyatt is handsome and charming and just might have been paid to make her forget about Anthony. Is falling for his charm worth the risk or should she take Anthony back again?

Romantic comedy lovers will eat these two novellas up! 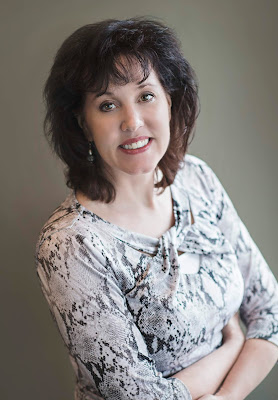 Janette Rallison is old. Don’t ask how old, because it isn’t polite. Let’s just say she’s older than she’d like to be and leave it at that.

Janette lives in Chandler, Arizona with her husband, five children and enough cats to classify her as “an eccentric cat lady.” She did not do this on purpose. (The cats, that is; she had the children on purpose.) Every single one of the felines showed up on its own and refuses to leave. Not even the family’s fearless little Westie dog can drive them off.

Since Janette has five children and deadlines to write books, she doesn’t have much time left over for hobbies. But since this is the internet and you can’t actually check up to see if anything on this site is true, let’s just say she enjoys dancing, scuba diving, horse back riding and long talks with Orlando Bloom. (Well, I never said he answers back.)

I love Janette Rallison's work so jumped at the chance to read these novellas and I was not disappointed. Both novellas were fun, witty and enjoyable to read. I do enjoy My Fair Lady and was interested to see Rallison's take on it. She nailed it. My two main problems with My Fair Lady are the crappy love story and the irritation that I can never tell if he likes her because of who she intrinsically is or if he, like Pygmalion, has fallen in love with his own creation. Rallison manages to fix these two issues and I was thrilled with the outcome.

For A Perfect Fit, Rallison takes a frustrating story and manages to make it enjoyable to read. This story carries on from the last story but swaps in a new set of main characters. The Main female character is in a very manipulative relationship and she doesn't realize it. This part was expertly done, as I get extremely angry with people doing stupid things, even if it is just in a book. This book was good in a number of ways. First, I have someone close to me who is in a relationship exactly like this one and I have struggled to understand how she can not understand what is happening. This book allowed me into the main characters thought process and even though, from an outsiders view, she is being incredibly gullible and stupid, she thinks she is being fair and logical. I am trying now to be more patient but I definitely recommended that she read this book in the hopes that something will ring a bell.

Overall I enjoyed both books, I enjoyed the writing, the stories and the way the books work together to tell two different stories while continuing some aspects from one book to the next. I would recommend these books to anyone who enjoys clean romance with a dash of humour.

Excerpt #2 - From A Perfect Fit
“You want me to seduce your sister?” Wyatt Nelson sat in front of his laptop, staring at the video feed of Garrett, his old roommate. Had Wyatt heard him right? Maybe the internet had glitched and he’d misunderstood the request. Asking Wyatt to go out on a blind date with his sister was one thing; asking for seduction was something completely different.
Garrett winced at the question. He usually looked like the poster child for a Harvard graduate: clean-cut, designer suit, born for high-powered business meetings. Now his tie was loose and his blond hair tousled, as though he’d been raking his fingers through it. “I don’t actually mean seduce seduce her. Not that. I was thinking more along the lines of just luring her away from her idiot boyfriend.”
Wyatt raised an eyebrow. Garrett had to be kidding. He was trying to set him up with someone who was already in a relationship? “So, what you’re saying is you want me to seduce your sister, who happens to be in love with another guy?”
Garrett waved his hand at Wyatt. “Shouldn’t be that hard. You’re a pro at romance. Half the girls at Harvard were in love with you. You must have some method to make them fall for you.”
Incredible. If Wyatt hadn’t already been friends with Garrett, he would have thought the guy was a colossal jerk. But he knew Garrett better than that. He was blunt and sometimes brash, but not completely unfeeling. “Girls like me because I’m a nice guy. The kind that doesn’t blatantly use people—you know, like trying to make them fall in love with me just because their brother doesn’t like their boyfriend.”
Garrett leaned back in his chair. “Hey, use whatever methods work for you. All I want is Jojo to be happily away from the influence of Anthony. ”