Laurie (L.C.) Lewis will always be a Marylander at heart—a weather-whining lover of crabs, American history, and the sea. She admits to being craft-challenged, particularly lethal with a glue gun, and a devotee of sappy movies. Her ninth published novel, her first romance novella, Sweet Water, was inspired by a visit to Oregon’s magnificent coastline, and time spent with Mother Eugenie, upon whom the character Mother Thomasine is based.

She is currently completing a political suspense novel planned for a summer 2017 release, a re -release of a romantic comedy, and she’s working on another historical fiction novel for a 2018 release. She loves to hear from readers.

Fears and secrets are the dragons we each must face. . . 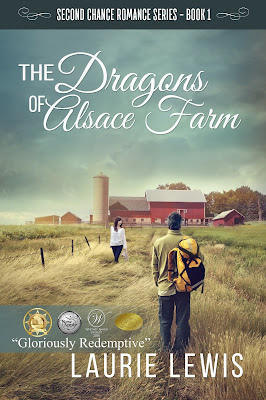 In need of his own redemption, Noah Carter finally confronts his childhood hero, the once-beloved uncle who betrayed him. Instead of vengeance, he offers forgiveness, also granting Uncle John a most curious request—for Noah to work on the ramshackle farm of Agnes Deveraux Keller, a French WWII survivor with dementia.

Despite all Agnes has lost, she still has much to teach Noah. But the pair’s unique friendship is threatened when Tayte, Agnes’s estranged granddaughter, arrives to claim a woman whose circumstances and abilities are far different from those of the grandmother she once knew.

Items hidden in Agnes’s attic raise painful questions about Tayte’s dead parents, steeling Tayte’s determination to save Agnes, even if it requires her to betray the very woman she came to save, and the secret her proud grandmother has guarded for seventy years.

The issue strains the fragile trust between Tayte and Noah, who now realizes Tayte is fighting her own secrets, her own dragons. Weighed down by past guilt and failures, he feels ill-equipped to help either woman, until he remembers Agnes’s lessons about courage and love. In order to save Agnes, the student must now become the teacher, helping Tayte heal—for Agnes’s sake, and for his.

1.     What is the thing you struggle with the most while writing? And how do you defeat it?
a.     Self-doubt is my biggest nemesis. The little voices tell me there are more critical things to do than write. And there clearly are, but then I  tell myself that the books authors write help others to push their own hard things back for a while, and then I feel good about hitting the keyboard again.
2.     What kind of music do you listen to while you write?
a.     I’m inclined to listen to soft music—Andrea Bocelli, Josh Groban, Alex and Sierra, and David Archuletta.
3.     What is your favorite part of writing? O
a.     h wow, there are so many delightful things. Creating interesting characters is fun. Sometimes I just laugh my head off at their idiosyncrasies, and sometimes they become part of you. I love seeing complex threads come together seamlessly. That’s when you know your story is tight and comes full circle. Typing THE END feels great because you met your goal. And the best part is hearing back from readers when they tell you your book touched them in some way. That’s immeasurably wonderful!
4.     Which of your personality traits did you write into you characters? (Deliberately or accidentally)
a.     All my characters have some part of me in them. It’s how I can relate to them and help them grow. Tayte from “The Dragons of Alsace Farm,” is very much me. She wants to do what’s right, but she has a tendency to be a steamroller. I think I do a pretty good job of reigning that trait in, but it’s there.
5.     Is there a message in your novel that you want readers to grasp?
a.     There are a few. First and foremost, I hope “Dragons” inspires readers to have the hard conversations with their aging loved ones early. There is so much guilt in managing an aging loved one’s life, and it triples when that loved one has dementia. Knowing their wishes and working out a plan before it hits, relieves so much of that guilt. Secondly, I hope readers feel the power of redemption in the book, that we all need to  be, and can be redeemed from even our biggest mistakes.
6.     Do you have any advice for other writers?


a.     Get started. Get a notebook to jot down things that inspire you—character treats of people you meet, places that wow you, fun words and names, story ideas, etc. Make a character bible for each of your characters. Know them and what they like look so well that you can see and hear them as you write. Outline your story. It’s awful, and the creative part of our brain hates doing it, but it will make your story stronger, and you’ll write more quickly with better continuity.