Let's get to know the Author before we take a look inside this book.

Cas lives in the lovely county of Hampshire, southern UK, where she was born. On leaving school she trained for two years before qualifying as horse-riding instructor. During this time she also learned to carriage-drive. She spent thirteen years in the British Civil Service before moving to Rome, Italy, where she and her husband, Dave, lived for three years. They enjoy returning whenever they can. Cas supports many animal charities and owns two rescue dogs. She has a large collection of cacti and loves gardening. She is also a folk singer/songwriter and is currently writing and recording nine folk-style songs to accompany each of her fantasy books. You can listen to and download all the songs from her website: www.caspeace.com
See the video of her performing live at the King’s Envoy book launch here:
http://www.caspeace.com/cas-peace/the-wheel-will-turn
Find out more at her website: www.caspeace.com 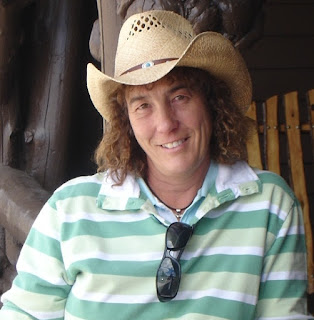 Ready for a look at the book?

Pure evil resists all attempts to destroy it, seeking only its ultimate vengeance.
Three years have passed since Reen’s trial and exile and changes have occured at the Manor. Taran now resides in Loxton Castle as Elias’s Court Artesan, with Sullyan, General Blaine, and Colonel Vassa all making regular tours of guard duty there. Accused of corrupting her daughter Princess Seline, the disgraced former queen, Sofira, has been exiled to Bordenn, where she nurses a bitter heart. And a terrible scarecrow creature has taken roost in a dank cell below the palace of Lerric, Sofira’s father.
Word reaches Sullyan of Reen’s suicide. The lack of a body and a series of dreadful events in Port Loxton—a vicious murder, a brutal ambush, and a devastating fire—raise doubts in her mind. She launches an investigation, unsuspecting of the evil that’s about to be unleashed... 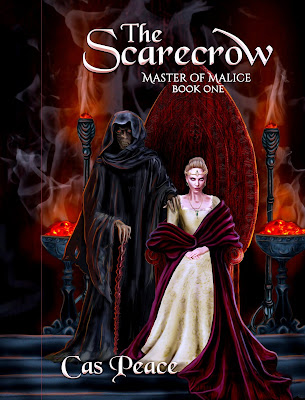 Grab your copy of the book today!
http://www.amazon.com/Scarecrow-Master-Malice-Book-ebook/dp/B0195QJJ7Y/

Check out the other books by Author Cas Peace

My Top Ten:
1) Anything to do with animals, especially dogs and horses. My favorite horse breed is the Friesian, which is why I put one in my novels. I also own two rescue dogs and support many animal charities.
2) Singing, especially folk-style songs. I have written and recorded songs to go with each of my Artesans novels. I also sing in my local church choir.
3) Chocolate!!
4) Dragons and (I have to admit!) unicorns. I have collected figurines and statues of dragons and unicorns since I was small and have a vast collection, some of which are quite large and live outdoors. But I don’t like “twee” ones, only those that look like they could be real.
5) Reading, especially fantasy and sci-fi, but also crime novels and mysteries.
6) Country walks.
7) All wildlife, especially butterflies. I used to breed and release UK varieties of butterfly, and belong to the Butterfly Conservation Society.
8) Playing my bodhran (Irish drum). I can’t read music so decided to take up drumming instead. It’s fun and very therapeutic.
9) Spending time with family members.
10) Hula-hooping! It’s something I’ve recently taken up to improve my fitness levels. I bought a sports hoop (something of a shock when you’ve never hooped in your life, even as a kid) and am working through various YouTube tutorials. I love it, even if I am getting through tubs and tubs of Arnica gel to soothe my bruises!

Check out all the great blogs that are a part of this event by following along on the Facebook page.
https://www.facebook.com/events/1528766444114732/