Book Tour and Review The Ring of Remaliha 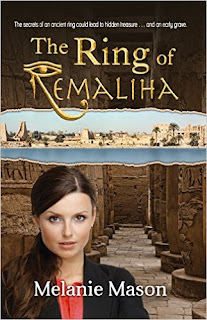 When Egyptologist April Tanner is asked to translate the hieroglyphs on an ancient ring, she is unwittingly drawn into a world of danger and intrigue. Her colleague, Dr. Peter Scherril, believes the glyphs will lead to a treasure hidden nearly two thousand years ago by an Egyptian named Remaliha. The problem is the glyphs don’t make sense.
A week after Peter is killed in a suspicious car crash, the ring shows up in April’s mail. She vows to decipher the artifact’s code and figure out why someone wanted Peter dead. Her inquisitions put her in the path of dashing archaeologist Nathan Hayes and his mysterious friend James Reddingham. Nathan invites April to join his expedition near Luxor.

Once she arrives in Egypt, April aggressively pursues her investigation of the ring. But soon she suspects the motives of both Nathan and James and finds herself dodging thieves and assassins at every turn. In the end, uncovering the secrets of the ring could lead to Remaliha’s treasure . . . or April’s own tomb. 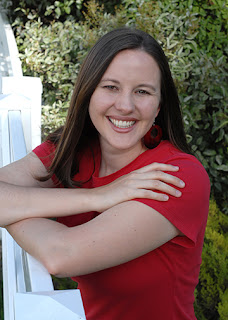 Melanie is an author, designer, and flight attendant all rolled into one. She graduated from Utah State University with a degree in communications.

Melanie has told stories all her life and finds her passion in sharing the plots that spin through her head. She hopes to be on an airplane one day and see someone reading one of her books.

Melanie now lives in Portland, Oregon—with her two dachshund Chihuahua dogs—where the beauty of the Pacific Northwest feeds her imagination and the rainy winter evenings encourage her to curl up with hot chocolate and a good book.

Well I finally have branched out and did a review for the first time, hope you enjoy it!

I am always hesitant reading new books from new authors because I have very limited time to read and don't want to waste it on a mediocre book. That being said I am very glad I took a chance on this book. This book was fun to read and had great twists and turns, some which I could see coming but a few that caught me off guard. The author also did a great job tying up the loose ends those plot twists presented. Now I must admit I hate books where the main characters do something really stupid (like not communicating with each other) however the story was written well enough and made the stupid actions believable enough that I didn’t want to scream at the characters in frustration. Over all the story line was fast paced, the plot intricate yet believable, and the characters well developed. I would recommend this book to anyone who likes clean books with action, adventure, and a smidgen of romance. This book would also appeal to those who enjoy YA books.

He had strode into her office demanding to talk to her. Sean didn’t want to let him in, but Peter had pushed his way through the door. Astonished, April had jumped to her feet. Peter looked like he had just come from an archaeological dig, and with his leather jacket and ruggedly handsome face, he had reminded her of Indiana Jones. As soon as he saw April, Peter had apologized for the intrusion, introduced himself, and begged for her help.