“I kissed Edward Wolverton once. It was everything it was supposed to be—and then some... maybe I’ll kiss him again.” 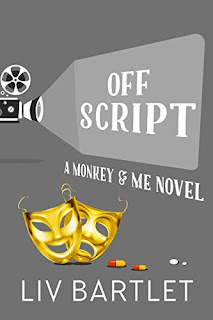 TV Producer Bea Douglas’s last confession to her former business partner and ex-best friend wasn’t meant to tempt the fates. She’s eager to escape the hypocrisy of the television industry and years of hiding her faith for the convenience of other people. Edward Wolverton may be hot, smart, and funny—but he’s also two steps out of rehab with a self-proclaimed allergy to Christianity.

But after a club night turns violent, Bea loses her sense of self while Eddie teeters on the edge of relapse. Their connection to each other is the only certainty. To be together, each will have to let go of past pain and have faith in a love that never fades.

Off Script is an uncommon story of the power of love and resilience to bring people together in a society that does its best to tear them apart.

He closed his eyes. As the pink and yellow sunset disappeared, a new
skyscape appeared behind his eyes. The LA skyline outside the Void premiere
at Le Chateau. Not a surprise. This had been the first moment he remembered
wanting Bea, a feeling he’d pushed aside.
Bea stood at the railing, exactly as she had more than a year ago. She
chewed that spot on her lip and stared into the lights of the freeway, searching
for something while seeing nothing. He’d stood twenty feet behind her,
befuddled with emotion and alcohol and unsure if he should speak to her.
Her hair shifted with the wind. The wild strands whipped around her
shoulders and plastered her face. He’d been drunk, no doubt about that, but
he’d still memorized the curve of her waist and slope of her shoulders in her
vintage 1950s dress. He’d wished he were free to flirt with her and lift the
burden that made her seem so sad as she stared into the wastelands of Los
Angeles.
He indulged the memory, allowed it to shimmer and transform. Instead of
walking off as she’d done that night, she turned and smiled at him. Her eyes lit
up, all that deep green reflecting humor and cynicism in equal portions. He
could talk to her here, maybe stop missing her for a moment. He moved
toward her, rewriting the memory a little more, and eased up to the railing to
watch headlights zip by like frightened fireflies. Her red nails tinkled against
the metal railing.
He reached out to her in his mind, begged for conversation. “I wonder if I’d
told you I loved you every time I felt it, would that have changed us?”

But the wisp of memory held no answers. Bea’s face collapsed, as it had.
She pivoted on those shoes and departed, as she had that night. 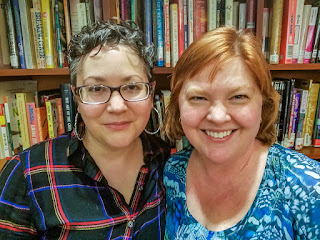 Liv Bartlet is the pseudonym for writing partners Becca McCulloch and Sarah McKnight, who have been building worlds and telling stories together for more than a decade. They’ve logged hours of behind-the-scenes movie and TV footage and challenged each other in a friendly Oscar guessing game every year this millennium. Lifelong Anglophiles, their Monkey & Me world sprang to vivid life on a trip to London that included divine pastries, sublime art, and a spectacular pratfall in the British Museum.

Becca is a professor, a scientist, and a secret romantic who insisted their first order of business in London was a meandering five-mile walk to see Big Ben. She lives with her husband, children, and an ever-expanding roster of pets in Logan, Utah.

Sarah is an Army brat, an Excel geek, and has a lot of opinions on the differences between science fiction and fantasy. She lives with her cat, Sir Jack—who is featured prominently on Liv’s Instagram —just outside Salt Lake City.