My name is Robyn Echols. Zina Abbott is the pen name I use for my American historical romance novels. I’m a member of Women Writing the West and Western Writers of America, and American Night Writers Association. I currently live with my husband in California’s central valley near the “Gateway to Yosemite.”
I love to read, quilt, work with digital images on my photo editing program, and work on my own family history.
I am a blogger. In addition to my own blog, I blog for several group blogs including the Sweet Americana Sweethearts blog, which I started and administer.

The gift of peace of spirit that comes from restitution. 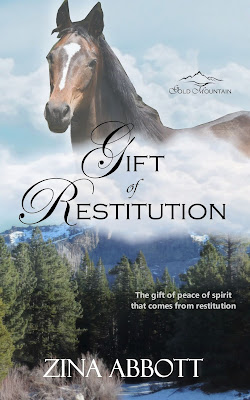 A year after Luke McDaniels broke away from the control of two eastern Sierra Nevada Mountain outlaws and freed Ling Loi from the Chinese brothel in Lundy, one aspect of their escape still plagues his conscience. Even though he made a point to take only what was owed him, and he left sufficient funds to cover the cost of anything he took from others without the owners’ knowledge or consent, there had been one exception. The second horse he planned to “buy” to assure a successful early winter journey was snatched away before his gaze. Another was left in its place. The ten gold half-eagles he allowed was less than the value of the one available to him. He hated short-changing the owner, but Loi, who took on the name of Joy when they married, had been his first priority.
Joy, grateful she has been restored to the way of decency, senses that Luke needs his own restoration. Can she convince him to do what he must to enjoy peace at Christmas?

1. What is your favorite Wintertime Activity?

Sitting in front of a fire and reading a book. Oh, you said ACTIVITY. I like to drive in the mountains and take pictures of snowy scenes for my blogs, memes, and book cover backgrounds. (See my book cover, bottom photo taken in the eastern Sierra Nevada Mountains.)

2. How many unpublished / half-finished books do you have in progress?

I have several chapters I originally wrote for my first book I self-published under my real name (Robyn Echols). They go with my time-travel Aurora Rescue series. After I developed the scene and characters, I decided they better fit the modern character I planned for a later book, one which I have not yet written. Will I ever get the later book written and use those chapters? I hope so.

3. What was the most surprising thing you learned when creating your book (in research or in yourself?)

This story has been rumbling around in my head for over a year. I knew just what I wanted to write. I intended it to be a short book—almost a post-epilogue. I thought I could sit down and get it written within a week or so. That did not happen.

4. Tell us about the greatest Christmas gift you ever received.

My current husband and I were married six days before Christmas because I wanted him living in my home on Christmas that year. It’s been a great thirty-one years.

5. What did you edit out of your book? (Such as a cut scene or an idea that just wouldn't fit?)

This book is a spin-off of one of my earlier books, Escape from Gold Mountain. It takes place about 11-12 months after the earlier book ends. I did not want the book to pick up where the other left off; I want it to focus on the incident involving the horse. However, it was a challenge to keep the back story to a minimum.

6. What inspired you to write this novel?

In Escape from Gold Mountain, I tried to portray my hero as a basically decent person desperate for a paying job. He took a chance and accepted a job only find himself trapped by a pair of outlaws. As he extricated himself from the illegal acts he was forced to perform in order to prevent them from killing him, he tried to balance between not turning himself over to the mercy of the law (from whom he doubted he would receive mercy) and maintaining as much integrity as possible. He does pretty well except for one instance. He knew, in order to save the woman he loved, he cheated a man. This story is about him making things right.