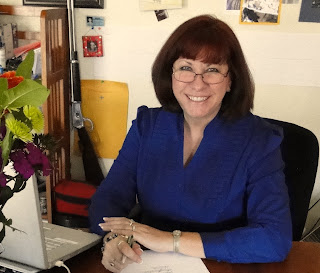 "Debra ""DJ"" Erfert, a winner of a 2017 Kindle Scout campaign, has authored five published novels, three novellas, and one Kindle World’s novella, and several short stories. She writes what her alter-ego dictates. Maybe it’s her super-ego. In her Window of Time series, Lucy is fearless and strong and has a secret power—all qualities Debra envies. In real life, spiders terrify her, which is why they appear on a regular basis in her books. “Confront your fears, and have your characters squish them!”

Debra uses the pen name DJ Erfert for her paranormal suspense/thriller books, and Debra Erfert for her romantic suspense/mystery books. She is an award-winning fine artist who lives in a southwest desert city in Arizona with her husband, Mike, a retired police lieutenant, where the average summer temperatures are well above 100 degrees—truly hot enough to fry an egg on the sidewalk. After raising two Eagle Scouts, she now spends her time writing and shooing her polydactyl cats away from her keyboard." 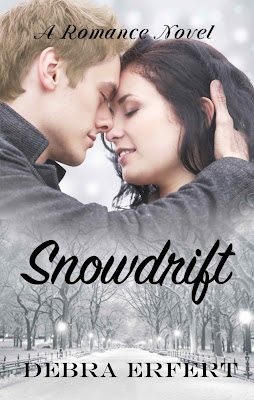 Artist Abigail Carson crashes off the deserted highway during a Wyoming blizzard while driving to reach her dying mother. Carbon County Sheriff Jackson Reynolds rescues her, leaving her Jeep in the snowdrift as the storm becomes a whiteout. They’re trapped at his ranch for the week leading up to Christmas, along with his two young daughters, a protective mother-in-law, and a bitter memory of his dead wife.

Tensions rise as Abby’s attraction grows for the tough sheriff. She must crack through his emotional wall before the storm breaks or lose her only chance for real love. But if the storm doesn't stop soon enough, Abby may lose her opportunity to ask her mother's forgiveness for running away almost ten years before.

Snowdrift is a story about love, faith, and forgiveness."

Q&A With The Author:


1) 50 words or less about myself:
If I had to describe myself I'd say that I'm not merely shy, but very sincerely shy. I dislike being in a crowd and having to talk to people. I'm afraid of making a fool of myself. This is why I love to read and to write. I only have to talk to my characters.

2) What I love most in the world is my family. I'd be happy without anything and everything as long as I am able to have my family.

3) I wrote my first story because I wanted to "see" a sequel to a movie that left the theater.
Although it's not something that can ever be published (copyright infringement).

4) My largest, unfulfilled dream is to be on the New York Times Best Seller list with a single title and not with a group boxed set. I want my writing to be the reason it makes the list, and not a group using a cut-rate 99¢ deal. I'm continually writing more books, and hopefully, my dream may come true. And to go to Scotland.

5) Writer's block? I don't believe in it. Sorry--no offense.

6) This is a little glimpse into who I am.

Several years ago I wrote a short story for the compilation book Value Stories for the Young Woman, published by Walnut Springs Press that has over 50 uplifting stories for young women. My title was Faith Epiphany. Not long before I wrote it, I was writing Changes of the Heart, a romance. The main character had a heartbreaking childhood where her mother had brain cancer. As a little girl, she had prayed and prayed asking God to heal her mother. The mother died 13 years after she was first diagnosed. The character believed the answer to her prayer had been a resounding no, or it was totally ignored. The experience left my character seriously doubting the power of prayer. After all, her mother hadn't been healed and had died from complications of her cancer. While I was writing a particular scene, I had my character have an epiphany that her mother had lived, she had lived long enough to see her daughter (my character) grow into an adult who could take care of herself.

I modeled the character after me.

As I wrote the words that flowed into my mind, I had my own epiphany about my own mother. My mother was first diagnosed with a cancerous brain tumor when I was only 6, and I remember kneeling in front of the waiting room chair with my little hands folded tightly and my face down on the blue plastic seat, praying to God with all my heart for her to be healed. My mother battled her illness for 17 years before dying of a complication. I just looked at it as my prayer wasn't answered. Except... she had lived--she'd lived long enough to see all her children grow up and move away, and that God had, indeed, answered my prayers.