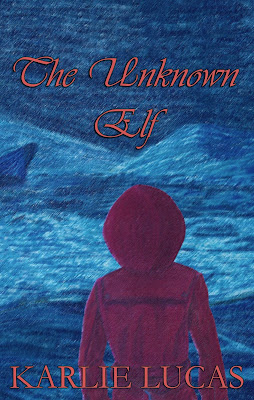 Marie never expected to wake up in North Pole City, let alone become Santa’s Emergency Replacement. It was a job she never wanted but couldn’t turn down, thanks to Clarence, Santa’s right hand man. Now, Marie has to work with Clarence, who believes she is some kind of criminal who will cause the destruction of everything he holds dear.

Trying to prove that he’s wrong, Marie keeps making mistakes that push them even further apart. It doesn’t help that she has a past she’d rather keep hidden. However, trying to keep her past where it should belong isn’t easy.

Just when Marie starts to feel like things are coming together, a madman with a bone to pick, and Christmas to ruin, threatens the whole of the North Pole Organization. Marie must rely on Clarence and her new friends to help her face her past before Christmas is gone forever. But does she have the courage to truly be herself when it could mean losing everything?

Q&A With The Author:

1.  Describe yourself in 50 words or less.
I am a dreamer of fantasy and adventure. I like to spend time with my hubby and kitty, but will forever be a writer. I can't get the stories to stop, be they original or fan fiction, there is always at least one going on in my head. I believe stories make us whole and give us hope, which is why I will never stop writing.

2. What do you love most in the world?
I would have to say I love my family the most in the world. Without them, I wouldn't be who they are, be they related by blood or ties of friendship. They mean everything to me.

3. What inspired you to become an Author?
I have always wanted to write, from a very young age. I love a good story and love to be able to convey them even more. It's a joy to see the looks on peoples faces when they read my work and love it. It's even more wonderful when I learn it somehow changed their lives for the better.

4. What is your largest unfulfilled dream, and what are you doing to reach it?
My largest unfilled dream, aside from having children, is to bring my publishing company into a place where I can help other authors bring their works out into the open, to give them a chance at being published, even if their books aren't the typical fair.

5. What is your trick for getting past writer's block? And what advice do you have for other authors who are struggling to tell their story?
I like to have several irons in the fire, as it were. If I get stuck on one project, I start working on another until I get stuck with that, or an idea for the original project comes to mind. Sometimes I try to work on different scenes until I can figure out how to connect them with the rest of the story. As to advice to other authors, just keep writing. You never know when something you think is trash will either lead you to an amazing scene or a completely different story that's even better than the one you're working on. Never stop writing.

6. Now that we've gotten to know each other, tell me a story. It can be long or short. From your childhood or last week. Funny, sad, or somewhere in between. Just make sure it's yours. What's your story?

Living in the Dallas/Fort Worth area, I come across all kinds of crazy things, mostly crazy drivers. One day, while on my way to work at the preschool, I had a driver decide to be completely mental. I had stopped for a red light and was behind several cars from the intersection on the far inside lane. There was a car behind me that wanted to get into the turn lane, which I, unfortunately, had blocked because I couldn't move forward.
Well, this car decided I wasn't giving them enough room to get into the turning lane so they started just honking. I inched up as far as I could, but that still didn't get them anywhere near enough room. They kept honking. The car in front of me moved up a few more inches so I did the same. There still wasn't enough room.
The car kept honking like an angry, barking little yappy dog. I put my hands up in the air to illustrate there was nothing I could do but they kept honking. Finally, the light turned green and we slowly inched forward as the car at the front of the line got into gear. The car behind me shot into the turn lane as soon as he had enough room, still honking. And then, without looking, he boomeranged into his left-hand turn, narrowly avoiding getting hit by the cars coming from the other direction.