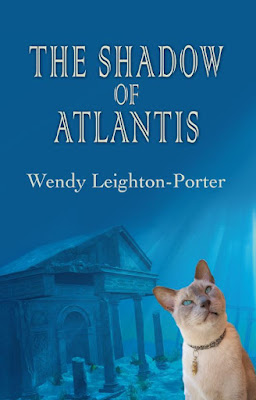 Ten-year-old twins Jemima and Joe Lancelot have no idea why their parents have disappeared, but a mysterious old book belonging to their father holds the answer … and so begins a quest to uncover the truth.

Together with Max their Tonkinese cat, and Charlie from next door, the children embark on an epic adventure, travelling back in time to the lost city of Atlantis, unaware of the dangers that await them.

Can they save the people of Atlantis from the disaster which is about to destroy their land forever? And will they find their way back to the safety of their own time before it's too late?

The Shadows from the Past time-travel adventures for Middle Grade readers take place over the course of the school summer holidays. The Shadow of Atlantis is the first book in the series and this is where it all begins. As the mystery unfolds, my young heroes embark on a magical journey into the past and a quest to unlock the secrets of an old book that is a gateway into the pages of history.
The box set with the first 5 books in this Series are *free today on Amazon! Make sure you get your copy now before it is too late!

10 FACTS ABOUT ME
1. I’m a “cataholic” or, more specifically, a “Tonkaholic”. I’m know I’m biased, but I think Tonkinese are the best cats in the world. Beautiful to look at, with jewel-like eyes of aquamarine, they have amazing personalities – super-intelligent, loving, sociable and talkative.
2. I have a passion for history and archaeology. I love delving into the past and am in my element when I get the chance to explore ancient ruins.
3. Books and reading are an essential part of my life. My Dad taught me to read before I even started school and I’ve never been without a book in my hands ever since. I often have two or more on the go at the same time.
4. I’m at my happiest by the sea, with the sound of waves lapping on the shore. I think it must come from being born under the astrological sign of the crab!
5. My favourite time of year is early summer when the weather is warm, but everything is still fresh and green.
6. I’m originally from the UK and was lucky to grow up in a beautiful village in the Cotswolds.
7. My main home is in France, but I’ve been living in Abu Dhabi (in the UAE) for the past 6 years, because of my husband’s job.
8. One of my guilty pleasures is Sticky Toffee Pudding! I can never resist it when it’s on the menu.
9. My husband teases me for being uber-competitive!
10. As a former teacher of French and Latin, I obviously love languages. I speak several, some better than others, and never want to stop learning. I’m ashamed to say that my Arabic hasn’t yet progressed beyond the basic stages, though – it’s hard!

Join the Blitz for another book from this brilliant series HERE