Catina worked her way through college as a TV reporter and a dating game show host. She's a sucker for Young Adult romance stories (both real and make-believe). She has a panache for match-making and loves that many of her "set-ups" have resulted in marriages.

After spending most of her adult life in Las Vegas, Catina traded in tumbleweeds for earthquakes and now lives with her husband and four children near San Diego, California. If she's not home, chances are you can find her at the beach, Disneyland or In-N-Out Burger.

Angela Larkin writes clean teen romance and is a big fan of kissing (in life and in books). She's been a gold miner, a pool cleaner, a mannequin dresser, and a teacher. She's lived a true romance: meeting her husband in a case of mistaken identity. They recently moved with their four children from the sparkling city of Las Vegas to the shade of the North Carolina Pines. Chances are, she's reading past bedtime. 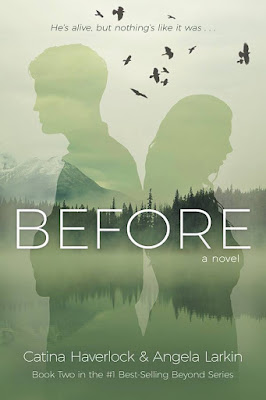 True love doesn't always mean a happy ending. Presley and Landon finally have a chance at a real relationship when they travel back in time, but their leap backward to two months before his accident has altered reality: Landon has no memory of Presley.

Hurt and lonely, Presley is still determined to save his life, even as Landon's death-date looms. He's alive for now, but nothing is like it was . . . Before.

59 Days Before
(Landon)
In all my memory of living in this house, we’ve never once closed the shutters in the family room. You’d have to be crazy to block out the view of the forest and the lake beyond. Today every shutter in the house is locked down tight.
Violet is spying through a crack in the entryway shutter, letting out dramatic noises. My cousin Reese looks at me from his seat on the river-rock hearth and rolls his eyes. He turns his attention back to his phone and shakes his head, not bothering to hide his smile from Violet.
“Yep. Still there. All eight of them,” Violet says.
“Any press is good press,” Reese says, not taking his eyes from his phone.
Violet rounds on us, then stares at me, eyes wide, like I owe her something. It’s not like I have any control over how many news vans decide to camp out in my front yard. Less than twenty-four hours after qualifying for the Olympics and my whole family is basically quarantined until my attorney and sponsors tell me what I can and can’t say to the media about Presley.
The thing is, I don’t even know what to say about Presley.