Denise is a Southern girl who has lived in Louisiana all her life, and yes, she has a drawl. She has a wonderful husband and two incredible children, who not only endure her writing moods, but also encourage her to indulge her writing passion. Besides writing romantic suspense, she enjoys traveling, reading, and cooking.

Accounting is a skill she has learned to earn a little money to support her writing habit. She wrote her first story when she was a teen, seventeen handwritten pages on school-ruled paper and an obvious rip-off of the last romance novel she had read. She's been writing off and on ever since, and with more than a few full-length manuscripts already completed, she has no desire to slow down.


Q&A With the Author:

4. What is your largest unfulfilled dream, and what are you doing to reach it?
I’m fifty-five years old, so I’ve lived long enough to leave a few dreams behind. Like becoming a professional singer. Yeah, that never happened. The thing I’ve learned is that it’s never too late to go after what you want, and it’s especially never too late to revise your dreams or even embrace new dreams. I know I didn’t exactly answer the question, but I don’t like to think of dreams as unfulfilled. I prefer to think of them as works in process.

5. What is the hardest thing you've ever done?


I can’t share that with the world because it involves someone else I really don’t want to hurt by telling the story. The second hardest thing I’ve ever done was planning my daughter’s wedding and then being too busy and too exhausted on the day to enjoy it. Then, when the reception was over, I had to watch her drive away with some guy, hoping and praying the two of them would be happy together and having no control over whether they would or not. It was a very helpless feeling. Just a postscript: My daughter and son-in-law have been married almost a year now and they are doing great. 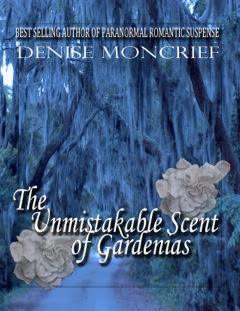 The temptation to earn a sweet payday and collect enough money to start her own interior design business is too much opportunity for Sophia Cannon to ignore, but working for her new client, Les Wakefield, is like working for a creepy stalker. He seems to be everywhere she goes.

Until trouble walks around the corner and into her life again…

Dylan Hunter almost turns down the Wakefield Manor restoration job until Les Wakefield tells him Sophia is the interior designer hired to oversee furnishing the old plantation house. Sophia has been the ghost in his life since the day she left him, haunting his heart with her memory every day and every night.

Stirring up more than just the spirits of the dead…

Sophia and Dylan fight with each other until a much bigger threat puts both their lives in danger. Discovering that generations of Wakefields have restored the plantation only to disappear months after moving in to the manor house stirs up spirits that would rather remain undisturbed.

Can love survive the long nights at Wakefield Manor with the unmistakable scent of gardenias hanging so heavily in the air?

When she flushed, the foul remains of her supper didn’t swirl all the way down. She didn’t want to flush again, but she had no choice. If she didn’t, Les would know about her weak stomach. How could she tell her husband that intimate relations with him made her vomit?
Her eyes watered from the physical strain of throwing up and the fear of being caught. When she lifted her head and gazed into the mirror over the sink, she shrieked and then slapped a hand over her mouth.
Blood covered the face reflected back at her. She pivoted to look behind her, but there was nothing but a blank wall. When she turned to face the mirror again, the face was clean. There was no mistake. She’d seen someone else’s reflection. Who had she seen in the mirror? Why was the woman crying? Why was there a look of abject terror on her face? And why was she covered in blood?
She glanced at the closed bathroom door. Had Les heard her?
“Celia? Where are you?” Rage electrified his summons.
She froze in place, her heart pumping blood through her veins at an alarming rate. The door flew open. Les stood in the hall, his face blotched purple and red with fury.