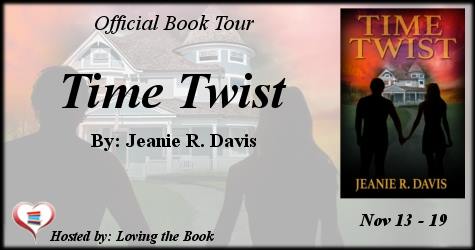 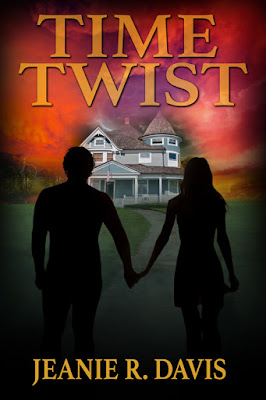 Arianna Miller tosses her luggage and her hopes into her Subaru and sets out to prove her talent—by decorating a Victorian mansion thirty miles from nowhere. She needs a fresh start and a break from painful memories. However, she is soon haunted by reminders of her past and endangered by foreboding mysteries.

Christopher Flemming is determined to stop his father's crime spree, which began in nineteenth century London and now threatens present day Colorado. He must find and destroy the time-traveling machine that brought them forward in time. More importantly, he needs to save Arianna.
Because of Christopher's blurred focus, Arianna finds her attraction to him untenable. She wants to help him, but he refuses to reveal his connection to the mansion.

Everything changes when Arianna stumbles onto the time machine before Christopher does. Will her future end up in the past? 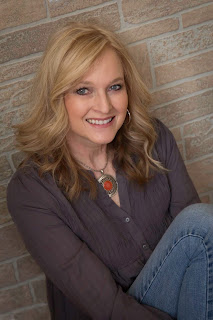 Jeanie Davis is an Arizona transplant—twenty-four years and counting. She loves peach ice cream, shopping, a clean house…oh, and chocolate, of course. She has traveled extensively—from Fiji to Africa and Europe to Costa Rica—but prefers being at home creating new adventures on her computer.

Her four daughters have left her nest empty, but they return often with grandchildren who bring real fun and adventure to her life. And thankfully, Jeanie's awesome husband, Rick, loves to join in on all her escapades.

A good romance will always capture Jeanie's attention; add suspense or historical ties and she's totally hooked. She's the author of a time-traveling adventure, Time Twist—the first of a romantic/suspense series with a twist of paranormal; an historical fiction novel, As Ever Yours, based on the lives of her grandparents, and a children's Christmas book, I Don't Know Why I Did It.

Jeanie is passionate about writing, and she always has a new story to delve into or an older one to revise. She began by writing poetry and music, which she still enjoys, but now novels have moved to the forefront of her avocational pursuits.
When she's not spoiling her grandchildren, Jeanie spends her free time curled up with a good book or typing away on her most recent mystery, adventure or romance.

I really enjoy time-travel stories usually preferring to go back. However, I liked this book and had a hard time putting it down. It was intense and a bit creepy but also had a great romance rolling into it. The only problem I had (and the reason for 4 stars instead of 5) was the ending. The characters all acted like the issues with the main antagonist are resolved, but it most definitely is not. This would make sense it is was a series but as far as I know, it is a stand-alone book. The solution to the problem of the main antagonist wouldn't actually solve anything when you consider the time-travel dimension. It was a good effort to not make the protagonists take drastic steps but based on the way the characters are written it wouldn't ever stop the antagonist from getting revenge unless he is dead, but unless I read it wrong he isn't.

I would recommend this book to anyone who likes drama, romance and a clean read.