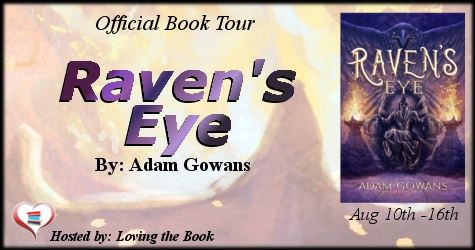 Adam Gowans is the youngest of five Air Force brats, out of which his siblings have voted him the weirdest. He loves anything that deals with stories, including movies, novels, television dramas, music, video games, manga/manhwa, and webtoons.

In his mid-twenties, he lived and taught English in South Korea for four years before returning to the States to live, like many LDS authors, in Utah.

His first novel is On Angelic Wings, which has a planned sequel, but the sequel will be released after two other novels that are calling for his attention.

Ever since magic caused his mother's death, Ha-Neul, crown prince of Balhae, hates witches and the magic they wield. He has instituted harsh laws against all magic users.

Lisa is a young witch working undercover as a servant in his palace, hoping to gain freedom for her people. The last thing the two expect is to fall in love. But when Ha-Neul learns that Lisa is not only a witch, but the daughter of the Prince of Vires, land of witches, he banishes her. Distracted by heartbreak, he is caught off-guard by a military coup.

In hiding and on the run, Ha-Neul swallows his pride and travels with his siblings to Vires, planning to beg Lisa's aid, only to learn that she has mysteriously vanished.

Now his only hope in reclaiming his kingdom and reuniting with Lisa lies in the remote Northern Mountains, a country no one has ever penetrated and rumored home of a powerful magic source. There, Ha-Neul learns that a being powerful beyond comprehension has been carefully guiding his destiny. But if Ha-Neul can't let go of his hatred of all things magic, and accept the new path offered to him, it will mean the destruction of his entire world.

Excerpt from the book:

Lisa made her way through the palace hallways with her head down but her eyes as straight ahead as possible, just as any musuri was supposed to do. When she stepped out of the elevator into the royal children’s wing, she hoped she wouldn’t run into the princess again. They had enough run-ins that Lisa didn’t want to repeat them, and she was more concerned than ever that she might lose her temper, considering the princess had just dishonorably dismissed her favorite nain, or personal assistant, for donating half her wages to support those in need of welfare in Vires, a land of witches.
Due to the splashes of color on her hanbok, the Balhaen traditional clothing, her faint reflection in the glass enclosing the garden caught her eye as she walked by. Navy blue colored the trim on the apron and the sash that bound it to her long skirt, or chima—also the same color as the trim and sash.
Lisa refocused on her duties and stopped at a tapestry to run her finger down its left side, allowing it to pop forward and slide to the right to reveal a storage closet filled with cleaning supplies and a cart. Lisa took the cart laden with cleaners, fresh rags, and dusters, then closed the door. She walked a little farther and stopped at a wooden sliding door beautifully carved with cranes flying low near water. She knelt beside it and knocked.
“Eorin Wangja-Mama,” she called to the prince in a humble tone using Hasoseoche, the palace speech. “May I enter?”
Lisa listened for a few moments, but no response came from within. She slid the door open a crack. She couldn’t see the prince in the large living room. Lisa opened the door the rest of the way, stood, and wheeled in her cart. The room was a mess. Toys—mostly action figures, vehicles, and large toy stations from several popular children’s programs—clothes, and blankets were strewn around the floor or, in the blankets’ case, hung to form a fort.
“Wangja-Mama, are you not here?” she said with a playful lilt now that she was in the safety of his room.
Silence answered her.
Lisa picked the clothes up off the floor and tossed them into three different woven baskets in the corner of the room: one for shirts, one for pants, and one for everything else. As she worked, she whistled a merry tune, one with lots of notes so she sounded like a cartoon bird as it flew, just as the prince liked her to, because she didn’t believe for a single moment that she was alone in the room. She approached the fort—taking care of where she stepped, moving toys around with her toes so she didn’t smash them—to gather a suspiciously large pile of discarded shirts. When she bent down, a hand shot out of the fort and snatched her wrist. Lisa laughed in response.
“You almost scared me that time, Eorin Wangja-Mama.”
A childish giggle she recognized as the prince’s came from the fort.
“Come out, Wangja-Mama.”
The finely dressed thirteen-year-old boy—though his clothes had wrinkles—crawled out of the fort. His short, neatly trimmed black hair stood up in odd places. His chocolate-brown eyes shone brightly against his dark, caramel-cream skin. The childlike demeanor surrounding him testified to his being mentally young.
“I really didn’t scare you?” His voice came out breathy and childish as he spoke to her in Hapsyoche, the speech of the wangsil, or royal family, reserved for palace servants and among themselves.
She smiled. “Almost, Eorin Wangja-Mama, almost.”
He smiled in return, showing perfectly straight teeth. “Can I help again?”
“Can I stop you from helping, Wangja-Mama?” Even as Lisa spoke, he grabbed a rag and bottle from the cart. She added in a whisper, “I’m going to get in trouble again.”
He started dusting the top of his giant wardrobe. Lisa shook her head and resumed gathering the dirty clothes.

Join the fantastic Blitz / Treasure Hunt for this book HERE!!!