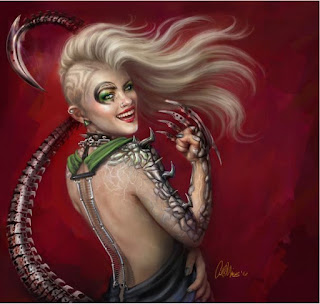 Lord Belmont’s life ended in Clovis, in the impenetrable darkness beneath the ground where forbidden rites were once held. Lady Gwendolyn was his love, body and soul, and the Demon in Blue Light killed her.

Every year, on the anniversary of Gwen’s death, he returned to Clovis to stand in the cold desolation, hearing the wind moan through the lonely passes, feeling her loss all over again.

On this anniversary, he wasn’t alone in Clovis. He heard the noises rustling in the brush. He smelled the raw river of Shadow tech. Then he saw it:

The claws …
The flicking tail …
The maniacal, glittering eyes fixed on him …
“I’ve been waiting for you,” it said in a grating voice as it attacked.
* * * * *

Far away, across the cosmos in a city of wondrous crystal towers, two people watch in horror as the desperate scene at Clovis unfolds. They had worked so hard, sacrificed so much, even argued for it before the gods. They convinced the gods they were right, that they knew best, and everything would go well.

If this situation went poorly, then ages worth of work would be lost, and, just possibly, the universe might come to an end.

This book will be published next year, in the meantime find all of
Author Ren Garcia's books, and the first books in this series, below
~ Amazon ~ Goodreads ~ Amazon UK ~
~ Amazon Canada ~ Amazon Australia ~ 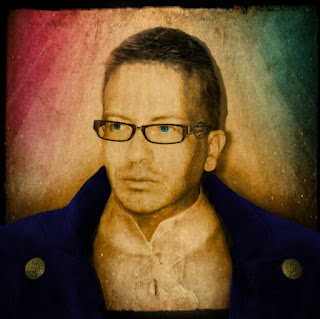 Still alive, she lay there, partially out of her head with delirium. She felt something holding her, gently cradling her head and neck in a warm embrace. Being held in such a compromised position wasn’t something she was used to. There were few warm embraces in Shade Church. She felt a heart beating and soft flesh, smelt sweet scents. Lengths of braided hair danced over her face. Opening her eyes, she saw nothing but a blur.
“Kat? Can you hear me?” came a soft voice. “Kat?”
What was Kat?
The figure leaning over her spoke. “Drink this. It will restore your strength. Drink.” A vessel came to her lips, providing nourishing liquid. She felt a hand caress her cheek. She lay there and drank the liquid. The liquid was delicious, she had never tasted such a thing. She felt strength return to her.
A voice whispered into her ear. “We’ve watched over you. We’ve wept as you suffered at the hands of the Black Hats and prayed the Fates would grant you strength. But all that is over now; here your life, your true life, will begin. Be strong for a little longer. Be bold. Such things await you, I promise. Not far from here is a group of ruins. These ruins are your salvation. Seek them out. The habitations above ground are safe; however, there is danger, and you must listen. First, the Sisters might come if they detect your Shadow tech, and if they discover you, their judgment will be swift. You cannot stand against the Sisters, their power is much too great.”
The figure held up a pouch of soft material and shook it. Metallic ob­jects clinked within. “In this pouch are three Sentrils. They will protect you from Shadow tech and will hide your presence from the Sisters’ gaze.”
She felt a hand come into hers. “You place one Sentril to your left, and the other to your right. The final you place before you. Stand between them and you shall have protection. Understand?”
She couldn’t respond.

To use Shadow tech at Shade Church was forbidden, but here …
“Forbidden, what you are doing is forbidden. The Shadow tech does not belong to you,” the Autocon said.
She concentrated, feeling it moving within her, feeling it slowly con­dense on her hands in a warm sludge. She felt it near, following her will. She smelt it, like blood, like hot metal. It came according to her bidding, pooling in her hands. Now to shape it, to mold it into a useful form. She imagined she needed hooks of some sort to climb the tree, and the Shadow tech responded, flowing across her hands, forming at her fingertips into stout claws. Now, holding the Autocon in one hand, she climbed, her new claws digging in, supporting her weight with ease. The trees were jealous of her clothes and her Autocon; they picked at her clothes, catching the fabric, trying to take them from her. Her limber body scrabbled up the length of the tree until she reached the top. Nestled in the heights, she could see all around. Down below, past the edge of the forest, she saw the silent remains of her atmosphere suit, its panels open like a wilting flower, the cavity she had occupied impossibly small. In the other direction, basking beneath the great stone of light overhead, was a fold of land easily traversable. She had many questions for the Autocon.
“What are those stone mounds I see?”
“Mountains, specifically the Westron Mountains of the Great Vithland Range.”
She gazed at them in awe. “And above, those lights?”
“Enough! Your mission is at hand.”
“Answer the question!” She banged the device against the tree. “An­swer!”
With considerable irritation, the Autocon answered. “That is the sky, the lights you see are stars, one of which you just now journeyed from. There are two moons out this evening: Solon and Elyria. Elyria is the larg­er and more reflective of the two. It will be daybreak in several hours. I suggest we proceed to the ruins immediately. The Sisters have no doubt detected the entry of the stealth missile into the atmosphere and will be investigating this area soon. We must have completed our mission and be gone before that happens.”
She saw a huddle of structures far off in the distance, the towering mountains looming over them—those structures were what she had been sent to investigate. She no longer cared much about the Black Hats’ mis­sion, or the Shadow tech Goddess for that matter, but the angel had told her the structures, the ‘ruins’, were her salvation. Perhaps the gods were there waiting for her. She was eager to see them.
She saw movement. She saw a great many large creatures moving at great speed through the forest, creating a breathtaking amount of noise.
“What are those creatures?”
The Autocon sighed. “Those are Vithland Wapiti, otherwise known as Common Elk.”
Kat watched the elk depart, admiring their apparent speed and strength. “We will now go to the ruins,” she announced with authority, relishing her new-found power over the Autocon. Standing there in her gorgeous new clothes, with a full belly and the enslaved Autocon, she felt as if she ruled the world. She was Kat, beloved of the angels and the gods. Kat God-loved. She opened the lid to the basket and tossed the Autocon in, shutting it tight as it protested. As the Autocon once inhabited her body, now it would in­habit her basket.
She set off, running through the trees, her feet crunching through loose materials on the ground.
She quickly found herself in a bit of a dilemma; carrying the basket was tiresome and difficult, slowing her down. She needed a better method for carrying the basket and she needed to move faster. She had no thought of leaving the basket behind, for the angels had given it to her. She pulled the Autocon back out. “I require assistance, for I cannot carry the basket and cover the ground.”
The Autocon laughed at her. “Hehehehehe … You call yourself Kat. Kat, a worthless feline creature crawling about on four legs with a little tail. Frolic on the ground, little Kat, and wave your fluffy tail.”
Kat thought about it. Despite the Autocon’s chiding, running on the ground might give her more speed. She recalled the elk and how fast they were. She dropped to all fours, her limbs limber and stretchy. Stirring the Shadow tech within her, her use of it steadily improving, she decided to put it to further use. She coaxed it out of her body in waves of dense, foul-smelling mist, forming it into a sturdy framework of black linkages around her arms and legs, forcing her into a crouching position, augmenting her strength and agility. Using the Shadow tech framework, she could move with great speed along the ground, loping like an animal, covering vast distances in only a short time. Shadow tech was truly a wonder; with it at her command, what couldn’t she accomplish? Carrying the basket, though, was even more of an issue now that she was on all fours. It was impossible, actually.
A fluffy tail … the Autocon said. Struck with inspiration, she sprouted a tail of Shadow tech from the base of her spine. Far from being ‘fluffy’, the meaning of which she didn’t quite understand, her tail was hard and strong, flexible and dexterous like a third hand. The tail easily took the bas­ket and held it over her head.
Proud of her ingenuity, she tore along the ground toward the ruins she had seen, loping along at amazing speed, the basket held securely by her tail.

Make sure you visit our Official Event page to find games and a chance to win even more prizes!