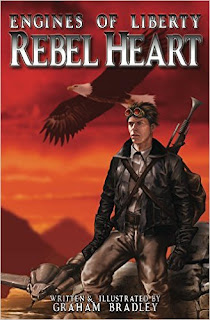 REBEL HEART
In 1776, the American rebels were thwarted by British magic. The leaders were executed, but the surviving soldiers went into hiding and kept the revolution alive. By 1984 they have developed better weapons and machinery to even the odds. Now all these "technomancers" need is an army for their arsenal, and their newest recruit is 15 year-old Calvin Adler of Baltimore. The problem is, he’s got a pretty strong will, and might give the technomancers at bit of trouble in training... 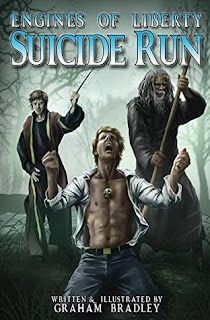 SUICIDE RUNCalvin learns that the technomancers aren't all good guys like he'd thought, and soon runs afoul of the worst of them. Now, with a bomb in his chest and a lot of ground to cover, he has a little over a week to save his life, or else become another casualty in the revolution. Meanwhile, an old enemy comes back stronger than ever, with ambition to spare... 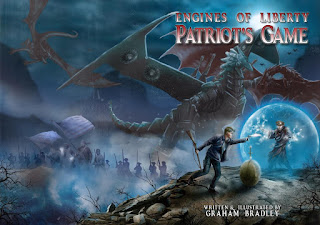 PATRIOT'S GAME
Calvin is on the brink of death. The army is scattered, the commodore is dead, and the British mages know about the technomancers' secret weapon. Just as all hope seems lost, Calvin and his friends find out the mages have a weakness, one that could end the war overnight and liberate the colonials.
But it will take a miracle to reach it... 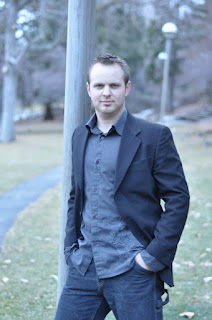 Graham Bradley is a truck driver by trade, but has been writing since age eight, thanks to the encouragement of a childhood teacher, Mrs. Peplowski.

Likewise, his grandmother made him promise to "do something" with his knack for drawing, so he illustrates as well.

He is fluent in Spanish, and knows the proper method of ironing a dress shirt. Despite spending less than 6 hours of his entire life in Indianapolis, the Colts are his team.

He lives in Henderson, Nevada, with his wife and sons.

Rebel Heart
If George Washington had lost because of both Magic, and bad press what would the world be like? Rebel Heart is based on an alternate history where the American Revolution was not only lost but completely forgotten about by the population as a whole. The English keeps the citizens in check and under their rule by using magic and generally terrorizing everyone. Our hero (Calvin) stands up to a few of the local wizards and in return is kidnapped by “Techromancers” people who oppose the kings run and are using illegal technology to try and fight back.
The world Author Graham Bradley has written is well thought out and believable. I enjoyed his tweaks to history which managed to intertwine his world into ours.  The characters are believable even down the annoying way some characters have an exaggerated belief in their own importance.
While I did enjoy the book on a whole I did struggle to understand how Calvin could come to the belief that certain people are evil. Nothing written in this book points directly to Evil. Yes annoying, controling and rude, but not evil. Yes trying to keep him away from the girl he fancies, but not evil.
Overall this is a fast paced book perfect for those who enjoy the YA Genre, steampunk, and alternate histories. It is clean, the most sexual content is as an almost kiss. There are a few swear words but mostly they are British, so if you are American you probably won’t even realise they are swear words. There is some war violence but again it is not gory or in too much detail.
I am interested to read the next book and see where this story goes.

Suicide Run
This instalment of the series has more action, is faster paced and has more characters. The new animals, technologies and magic disciplines turns a familiar landscape into a more exotic one. It adds to the story and enhances the depth and scope of the plot line. There are a few times I found myself thinking “that is really cool” particularly when it comes to some of the magical ability shown by the main protagonist in this book, the wizard Godfrey.
This story does however starts with Calvin being a total and complete twat. Like most teenage boys he thinks only of himself and his immediate needs regardless of everyone else around him. I am afraid it made me struggle to feel sympathy for his plight a bit later on in the book when he kind of deserved it. It also plays into my feelings from last book that his belief of certain people being evil doesn’t quite pan out. Yes it does paint one or two people as evil but not the majority of the ones he has pegged as evil.
I did enjoy this story, yes it did irritate me at times, but that irritation does drive the story forward, and it shows that hero’s do not always make the correct choices and are not always in the right.
Again I would recommend this book to fans of YA, Steampunk, Alternate History and fantasy. There is some mild swearing (mostly British words) and some non-gory war violence.

Patriots Game
This book starts strong and doesn’t let up through the entire story. And I am relieved to see that Finally I was able to get the information needed to understand how Calvin could see someone as evil! It was a relief to say “Ok, yes he was right”
The whole book is face paced, bringing most of the characters back together, even the small bit players (at least the ones who are not dead).  You get to see how each person is able to fit into the whole scheme of things. This is done well so you don’t feel like the author has gone off on a tangent. Instead they all play a part in the main conflict and their choices and actions affect the outcome of the battle.  Because of the hints laid out in the books you will know what would have to happen at the end before you get halfway through the book, however that knowledge does not curtail the enjoyment of the scene any.
Author Graham Bradley has a rich imagination that has built a vivid and believable world that is as reliable as it is uprising. Well done!
Mild swearing, one fairly strong word (only if you understand British swearing, if you don’t it will completely go over your head). There is also war violence, more than the last two books but again it isn’t graphic.
I also recommend you read the whole series in order these are not meant to be read out of order or as stand alone books.
If you like YA, fantasy, steampunk or alternate history then this series is one you need to read.