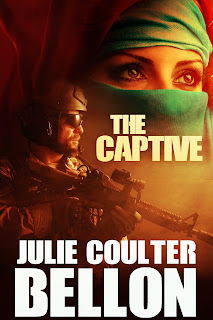 Former Navy SEAL Jake Williams is the newly appointed head of a task force assigned to rescue a kidnapped American diplomat. Their only hope is Mya Amari, the daughter of a notorious Algerian hostage negotiator, but she is full of secrets and complications–something Jake takes as a personal challenge. As they grow closer, the threat to the mission escalates and time runs out for the hostages. Can Jake unravel the web of deception to save them all without getting caught in the crossfire?

Mya Amari has been in hiding nearly her entire life to escape her father’s enemies. But when her sister is kidnapped along with an American diplomat, she’ll do anything to bring her home–including walking into the enemy’s lair. She doesn’t trust anyone, especially the too-handsome-for-his-own-good Commander Williams, but when all her careful plans explode out of control, he’s the only one she can turn to with the truth about her family. Is it too little, too late? 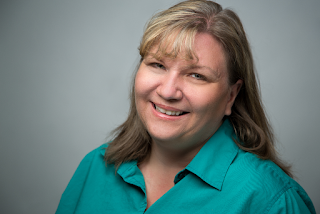 Julie Coulter Bellon is the author of more than a dozen romantic suspense novels. Her book All Fall Down won the RONE award for Best Suspense and Pocket Full of Posies won a RONE Honorable Mention for Best Suspense.

Julie loves to travel and her favorite cities she's visited so far are probably Athens, Paris, Ottawa, and London. She loves to read, write, teach, watch Castle, Hawaii Five-O, and eat Canadian chocolate. Not necessarily in that order.

Julie offers writing and publishing tips as well as her take on life on her blog ldswritermom.blogspot.com You can also find out about all her upcoming projects at her website juliebellon.com

He was looking out the kitchen window when Mya came in. He could see her out of the corner of his eye, standing in the doorway, watching him. She looked undecided, as if she wanted to come in, but didn’t know if she should. “Is everything okay?” he asked finally, turning his face toward her.
“Yeah.” But she still didn’t sound sure.
He moved to the table and motioned her toward it. “Looks like a pretty quiet neighborhood. I don’t think we have anything to worry about.”
“That’s what I thought about the last place.” She shuddered slightly. “Watching those gunmen through that camera made me feel so helpless. I thought they were going to kill them, then come for us.” Her voice trailed off.  “I’ve lost so many people in my life.”
The vulnerability in her voice was unmistakable, the longing for connection. Jake saw himself in her statement, their similar losses forging an emotional bond he’d never felt with anyone else.  He put his hand on hers, needing to touch her. “You won’t lose me.” The attraction that had been simmering between them flared to life. He lifted her hand, letting his thumb run over her knuckles. “I promise.”  She sucked in a breath, unable to keep her eyes off him as he flipped her hand over palm up and pulled it to his mouth, kissing the inside of her wrist.
“Jake,” she whispered, leaning close.
He lifted his hand to cup her face and she nestled her cheek against it.