Kingdom By The Sea Review 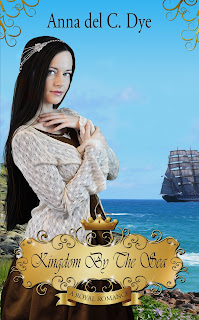 When a ship's captain is forced to enslave island natives to please his fiancée, Princess Serena, he takes refuge in the company of a beautiful slave girl. The princess is devastated by his betrayal, and the lives of all the slaves in her realm are now at risk. The heart-broken princess has acquired great power at her father’s death, could she use it to force the captain’s fulfillment of his promise to her? Or will the affectionate stable-hand, despite his own secrets, have his chance at her heart after all?
In the romantic style of master writers like Anita Stanfield, Anna del C. Dye has skillfully entwined these relationships into a captivating, edge-of-your-seat medieval romance that will have readers guessing until the final page. Young adults everywhere-A Kingdom by the Sea is the book you MUST read!

Amazon: All of Anna's Books 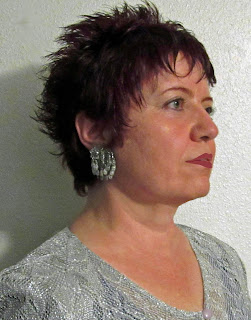 Anna was born in the extreme South along some famous beaches. She grew up with four other siblings, being placed in the middle.
Anna moved to the USA to marry her husband, Rodney, and has resided in Utah since then. Her husband, a native of Idaho, met her in her hometown. They fell in love and she came to Utah on Christmas Eve to be married two weeks later. They are the parents of three princes and a princess.
Early on in her life she showed an affinity for sewing and took classes that rewarded her with the opportunities of doing costuming for the cast of four musicals, and for Utah’s own Fantasy Con, which she enjoyed immensely. She is fluent in both English and Spanish. Anna lives in Taylorsville Utah.

Some of Anna’s writing recognitions:
She received the Editor’s Choice Award from the International Library of Poetry and had her article entitled A New American Mother published by Desert Saints Magazine. Her short story entitled Amerine—Fairy Princess won an award in the Oquirrh chapter contest and was published by Kalkion Magazine. (Now it is published as an e-book.) Other articles about family and relationship have been published frequently in the MOMS CLUB® of Salt Lake Valley-West. She has published 7 books on her Elf series. One won a bronze seal, another first page second place and yet another Honorable mention. Her love story was published by Deseret book in the anthology entitled Angels Round About compiled by July C. Olsen. Another of her articles was included in the book Mother’s Message in a Bottle, edited by Tyler Hayden and published by Ninbus Publishing. Her new series A Royal Romance was published in Feb 2015 with the first book being “Once Upon Two Kingdoms, which won a first page award. “A Kingdom by the Sea.” Second book in A Royal Romance, was published Feb. 2016.


Connect With The Author Here:

I must say that from just reading the book blurb I had no clue how the Author would make this book work. I just couldn’t see how anyone would even care if the princess finds love. But she did it and she did it beautifully! There were plenty of twists and turns, making you second guess everything you knew about a person. In some places it got a bit wordy but overall the story is enjoyable and fun to read. I liked seeing the main female character develop throughout the story. But my favourite character was the stable boy. While It is written specifically for YA I would recommend this for anyone who enjoys a great clean story with heart.


Where did you get the ideas for this book?
Kingdom by the Sea was created the night after I saw the musical AIDA, I couldn’t sleep because I was disappointed with the ending. (It’s just me, the musical is great.) I spent the night thinking what would I have done different if it was my story and by morning Kingdom by the Sea had been born.
Aida has a ship’s captain and he is the main protagonist. He is the princess’ lover and he does fall in love with a slave girl.
Kingdom by the Sea has some of these elements but the story follows the princess and her awakening to a world she was part of but never knew. It turns out completely different from the musical Aida and that is what makes it awesome.

Are any of your characters like the real people in your life?
Many of my characters are not purposelessly like people I know, but they are like them. In my Elf books The Silent Warrior Trilogy, Adren, the princess, is just like my daughter. They are one, calm and soft on the outside but you know that a sleeping giant is awaiting to surface.  There is strength within all of us, but not all find it.

Do you have a favorite story about one of your readers?
A teenager entered my booth once and bought one of my elf books and said, “Now I need to go buy candles.”  “Candles?” I asked. “Yes, to read your book.” I said, “Why don’t you use a light?” “No way,” she said. “You can’t read a book like this one without candles. They are the only way to live in the scene with the characters.”

How many books have you written?
I have written quite a few, but I have published ten:
The Silent Warrior Trilogy
Book 1 The Elf and the Princess
Book 2 Trouble in the Elf City
Book 3 Elfs in a Conquered Realm
I have also written:
The Royal Elf of Avalon
Curse of the Elfs
Shahira and the Flying Elfs
And the last one in that series: The Roilden Stones of Elf Mountain
I have the middle grade book, Emerine’s Nightmare, published in electronic format only.
My new series is A Royal Romance and there are two books out so far in that series:
Once Upon Two Kingdoms and Kingdom by the Sea
(questions supplied by Christy Monson)