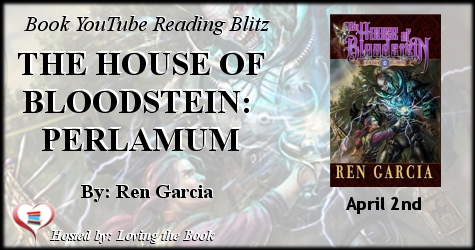 There is a treasure hunt with the prizes being a $100 and $25 giveaway! The Treasure Hunt Questions will be based on the videos on the Author's YouTube Channel and you can answer the questions and find the YouTube links in the Rafflecopter at the bottom of this post.

Ren has been an avid lover of anything surreal since childhood. He also has a passion for caving, urban archaeology, taking pictures of clouds, and architecture. He currently lives in Columbus, Ohio with his wife, and their four dogs. 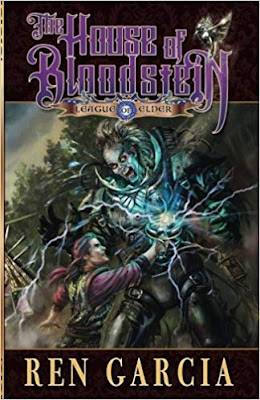 Mysterious and elusive, Lady Chrysania of Bloodstein calls from the ruins of her castle. She dwells in the dark, hiding her face, ravaged by an ancient curse. The only way to break the curse is to win a game called Perlamum. If she loses, she dies. She looks to her Vith kin in the west, begging for help acquiring the all-important pieces she needs to play the game.

Lord Kabyl of Blanchefort, his Ne-Countess Sammidoran, and his cousins answer her call. However, collecting the Perlamum pieces for Lady Bloodstein is a deadly game. They must face a host of perils:

-The terrible Black Hat in the city of Waam who knows their every move.
-A hated rival on the planet Xandarr and the bewildering labyrinth of Gods Temple.
-The man from Shook who cannot be killed.
-A family of vile bravos from the south.
-The diabolical Dead Men of Mare, nigh invincible creatures straight from an insane nightmare.

To even the odds, Kay and Sam turn to a forgotten graveyard deep in the Telmus Grove, and the great eminence resting there.

Can Lady Chrysania of Bloodstein be helped, or, for that matter . . .

10 Fun facts about the Author:

--I was once engaged to a woman 20 years my senior.
--I once looked down the barrel of an FBI Agent’s drawn pistol.
--I once took a home IQ test from a book and scored a 58.
--Similar to the Bird Box challenge that’s all the craze these days, I once nearly plunged to my death by walking into the deep end of a drained swimming pool in a pitch black abandoned YMCA.
--I was once royally chewed out by Maria Shriver.
--A childhood rite of passage, my bout with the Chicken Pox nearly killed me as a boy.
--My entire family has brown eyes, yet I have blue eyes. After 3rd grade biology class, I announced to my mother that I couldn’t possibly be her son.
--I once received a check for $150 dollars after a treasure chest full of stolen Mexican booty was discovered on a relative’s property. The $150 was my share of the divided spoils.
--For a 2nd grade essay in 1975 that was to be placed in a Time Capsule under the school, I predicted the coming of GPS.
--As the infamous White Hurricane of 1978 dumped 10 feet of snow on the ground and gave us -61 wind chills, I STILL had to go to school in a treaded armored personnel carrier donated by the National Guard.

1)—How is the Mad Black Hat of Waam able to track them in space with such accuracy?
A)—Extensive Spy network
B)—Respawning StT’s
C)—A tracking beacon.
D)—Psychic precognition.

See our Official Event Page for links to where you can find the rest of the Treasure Hunt Questions.