I am retired high school English teacher. A devourer of books growing up, my profession introduced me to writings and authors from times long past. Through my studies and teaching, I fell in love with the Ancient and Medieval Worlds. Now, I hope to inspire young readers and those Young-at-Heart to read more through my Quest Books set in these worlds.
I also conduct Medieval/Short Story Writing Workshops in Elementary/Middle School classes. Contact me if you are interested in holding a workshop for students: ccarpinello@mac.com.

When I’ve finally figured out the path that my characters need to take, and I get the rewriting finished.

Keep plugging along even when what you envisioned isn’t working. There is a path to the solution, you just have to keep writing and thinking.

At the dawn of Camelot, one young girl is about to take her place beside the greatest king in England’s history…. 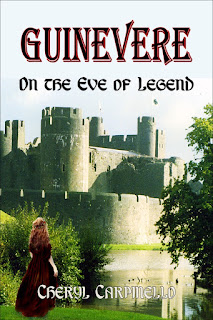 She is a mere child of twelve. But in these medieval days, this is the age when childish things must be put away and greater responsibilities accepted—all in preparation for a betrothal of marriage.

For young Lady Guinevere, on the advent of her thirteenth Birth Day, the whole idea is quite unbearable. After all, what could be better than spending her youth playing with her best friend Cedwyn, roaming the grounds around the castle looking for mythical creatures or hunting rabbits?

However, the wizard Merlyn—her teacher and friend—knows that destiny has a way of catching up with a person. His arrival sets in motion a series of events that will lead Guinevere to her destiny whether she is ready for it or not.

Guinevere stood by the door.  In between glares at Cedwyn, she kept looking out into the bailey courtyard.
"Hurry up, Cedwyn.  Merlyn’s going to leave without us,” she whispered, not wanting to wake Brynwyn.
"I'm comin'," he replied, pulling on his other shoe.
Ready at last, the two hurried toward the castle gate and Merlyn.  The sun was just starting to peek over the horizon.
"Humph!  About time!" Merlyn said as they reached him.  "Not able to get enough sleep?  Maybe dreaming of dragons?!"  He chuckled as Cedwyn's expression betrayed the fact that he had had a very restless night.  "Well, it's daylight now.  Dragons sleep in the light so we should have a very uneventful trip.  All we have to do is find King Pellinore and that darn bratchet dog!  Let's hurry up now.  We have plenty of forest to cover and who knows what we will come across," he finished as he marched out of the castle gate and toward the forest, his long strides threatening to leave them behind.
"Do dragons really sleep in the day?  Merlyn, how come you said we would have an unev'ntful trip when we don't know what we will come across?" Cedwyn asked as he and Guinevere hurried after Merlyn.
Merlyn just chuckled and motioned them to follow.  "One never knows what the forest will reveal, but at least it won't be dragons!"
"What does he mean, Guin'ver?"  Cedwyn asked, confused by Merlyn's double talk.
"I'm not sure, but let's not let him get too far in front."  She glanced ahead.  Merlyn was just ducking under the edge of the forest canopy.  Nervously, she looked around, mindful of the last time that she and Cedwyn had been in the forest.  Thankfully, nothing appeared to be moving in the tall grass on either side of them.
"Do you think we’ll run into that wild pig again?  Will it remember that you were the one that shot it?"  Cedwyn asked.  He had additional questions, but Guinevere turned and put her finger to her lips.
"If you keep talking so loud, it will find us.  So be quiet and hurry.  Merlyn's already out of sight."
Cedwyn looked up the path, but Merlyn was nowhere to be seen.  He started to panic.  Once they stepped under the dark green forest canopy and out of the sunlight, Merlyn’s flowing grey robe appeared just ahead of them.  Cedwyn heard Guinevere's sigh echo his.
Merlyn waited until they caught up before choosing a hidden path through the scrub brush.  The trio moved in deeper in the forest, Merlyn in the lead.  Guinevere came next.  She followed somewhat hesitantly, her and Cedwyn’s run-in with the boar still vivid in her mind.  Her heart raced faster at the thought of meeting another one.
Cedwyn came last, at times having to run to keep up with Merlyn's pace.  Of course, it would have been easier if he hadn’t kept stopping to investigate the brown and green vegetation all around.  He wasn’t looking for the bugs, worms, or small creatures common around the castle.  No, what Cedwyn watched for was whatever Merlyn referred to when he told them that he didn't know what the forest had in store for them.  He wanted to be ready, but for what he wasn't sure.
"Guin'ver?" he asked as he caught up to her where the path widened.  "What do you think Merlyn thinks might be in the forest?"
"I don't know," she replied, catching herself looking around.  "Let's just stay close.  Merlyn can take care of anything that comes near.”
"Now, I wouldn't be so quick to say that, Lady Guinevere,"  Merlyn said as he stopped.