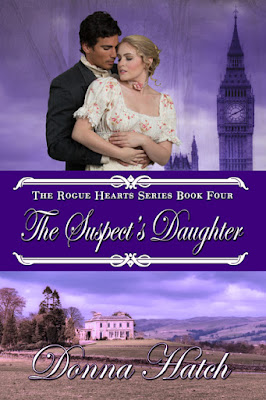 Determined to help her father with his political career, Jocelyn sets aside dreams of love. When she meets the handsome and mysterious Grant Amesbury, her dreams of true love reawaken. But his secrets put her family in peril.
Grant goes undercover to capture conspirators avowed to murder the prime minister, but his only suspect is the father of a courageous lady who is growing increasingly hard to ignore. He can’t allow Jocelyn to distract him from the case, nor will he taint her with his war-darkened soul. She seems to see past the barriers surrounding his heart, which makes her all the more dangerous to his vow of remaining forever alone. 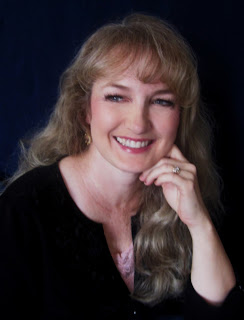 Donna Hatch is the award-winning author of the best-selling “Rogue Hearts Series.” She discovered her writing passion at the tender age of 8 and has been listening to those voices ever since. A sought-after workshop presenter, she juggles freelance editing, multiple volunteer positions, her six children (seven, counting her husband), and still makes time to write. Yes, writing IS an obsession. A native of Arizona who recently transplanted to the Pacific Northwest, she and her husband of over twenty years are living proof that there really is a happily ever after.

I figured that this book would be really dark because the main male character has such a dark personality. However it wasn’t. It was really nice to finally be able to see onto the Grant’s past, but it is revealed at a good pace only giving out the information as needed. You really feel for him. The main female character Jocelyn is one of my favorites of the whole series. Mostly because her personality could have been models off me Mum's. Sweet, kind, wanting to love and care for everyone. Together the main characters are the perfect fit, I would know, my dad is a grumpy almost scary man with a heart of gold hidden deep inside and my parents complement each other perfectly. This may be why I have such a sweet spot for these characters. But whither this is the reason or not I loved this book. It is well written, excellent pacing, fully developed characters and a solid plot line. If you have any interest in this genre then this book is a must read!
https://www.amazon.com/review/R3DUMTAIAKBEX6/ref=pe_1098610_137716200_cm_rv_eml_rv0_rv

Always wearing a cheerful and sometimes impish smile, Jocelyn is a lively blue-eyed blond of about twenty one, who has a lush figure but thinks she's unfashionably plump.

Tall and dark with serious gray eyes that are often snapping with sarcasm,Grant is gorgeous but has such a hard edge that he can't be considered classically handsome. A long, ragged scar mars the entire right side of his face, giving him a formidable appearance. But on the rare event he smiles, he transforms into heart-stoppingly stunning.

Snippets:
Gritting his teeth, he determined to survive the painful ritual of tea with two ladies. He’d faced down enemy soldiers trying to kill him, watched friends die, met danger head-on with his brothers—witnessed one of them shot, and one of them hanged and then battle his way back from near death. Grant had even endured torture and captivity. Surely he could emerge unscathed from such domestic tranquility. If he hurried. And if he could burrow more deeply into his role of earl’s son who frequented parlors and ladies and tea.

***
Softly, slowly, she reached up and touched his scar with one finger. He held his breath but didn’t pull away. She traced the raised smooth pink line from the corner of his eye down to his jaw. What would make such a ragged injury? It looked torn rather than cut with a blade.
Her attention focused on his mouth. Would a man like him kiss roughly, like his hard exterior, or would he be gentle, like the soft heart she’d seen in brief glimpses in between the chinks of his emotional armor?

Grant hung back, saying nothing, except a nod when Jocelyn introduced him. As she spoke to Lucy, Grant picked a tiny wildflower, crouched down, and presented it solemnly to little Flora. She took it, just as solemnly, and curtsied. His expression softened. Flora smiled. Two year-old Mary approached shyly, and did a little twisting kind of dance, chewing her lip and eyeing Grant expectantly. Kneeling to get eye-level with her, he offered her a flower as well. She beamed and accepted his gift as if he’d handed her a treasure.
His eyes softened and his mouth curved. A smile.
Jocelyn’s heart turned into the consistency of warm pudding. The crusty Grant Amesbury was gentle with children. And he’d smiled.