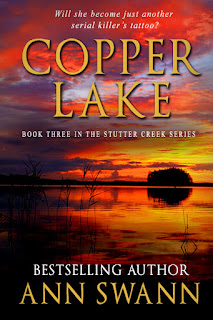 They call him the Killer Cartographer because he carves the map coordinates of each victim on the femur of the one before. Then he tattoos the information on his skin. Can Detective Kendra Dean bring him in, or will she become his next tattoo? 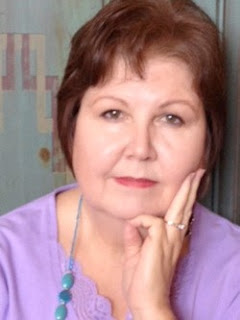 Ann lives in Texas with her husband and rescue pets. She loves libraries and book stores and owns two e-readers just for fun. Ann writes what she likes to read.

All For Love, a Contemporary Romance filled with heartache and hope, was Ann’s first novel for 5 Prince Publishing. It has been on Amazon’s bestseller list for Literary Fiction.

Her Romantic Suspense series begins with

Stutter Creek, which has been on Amazon’s bestseller list for Romantic Suspense, and continues with her newest release,

Lilac Lane, which one reader called “almost too scary.”
Book three will be out in 2015.

She also writes short fiction, which is usually speculative in nature. To find out more simply contact Ann at one of the ways listed below, or click on the STAY UPDATED button on her Amazon Author Page.

I don’t like this book. It was creepy and gave me goose bumps but was so well written that I couldn't put the damn thing down! The Book starts out with the killer and you get a look into his mind from the get go. Then as the book goes on you get to know more and more about him, (this is me shivering from disgust).  The killers POV is interspersed with the POV of a few other people mainly Detective Kendra Dean.  One of the other characters who’s POV you see, I am guessing, is the main character in one of the previous books in this series. This brings up questions and, if I wasn’t so freaked out, would make me want to read the previous books. However this insertion of characters and little tidbits about the other books does not detract from this story at all and this book can still be read as a stand alone. This book was clean, all sexual content was off page. There might have been some swearing but honestly I didn't notice I was too wrapped up in the story. If you enjoy things creepy then this book (and probably the whole series) is a must read. Curse you Ann Swann this book will haunt me for years to come!

#1
Though one might think he would’ve taken out his frustrations on the same type of haughty stuck-up girls who’d laughed in his face, such was not the case, at least, not at first. In fact, when he initially encountered the freeze-out, as he had come to think of his brief period of female-species-interaction, he hadn’t sought any sort of revenge. He’d simply turned all that hurt and anger inward. The insides of his thighs became crisscrossed with scars where he’d cut himself with his dad’s double-edged Gillette razor blades.
The first cut had been accidental. He’d been standing at the mirror in his skivvies, practicing shaving—something he wouldn’t have to do for a couple of years—when he accidentally dropped the heavy razor. On the way down, the thing had clattered off the edge of the porcelain sink, and the sharp blade had sliced into the tender meat of his inner thigh.
He’d been shocked that the razor had fallen so perfectly, slicing down the thin, pale skin with such fantastic accuracy. Then curiosity had set in, and he’d watched, fascinated, as the long shallow line had filled with bright red blood. When the filled line welled over and began to trickle down toward his knee, he’d sat on the edge of the tub and simply observed. The stinging hadn’t set in until the blood had already begun to dry.
Then he had used the tips of his fingers to pull the edges of the cut apart so he could watch the blood well up again.
That had been the beginning.

#2
Kendra’s mouth fell open, and her heart dropped into the pit of her stomach when she realized she was looking into the empty black eye sockets of a skull. Oddly, though, this skull was not half-buried in the earth the way one would think it should be. Nor was it scattered in pieces as if it had been dug up and deposited there by wild animals. No, indeed, this skull appeared to be right where it belonged, sitting at the top of a fully formed skeleton reclining on a bed of clover, hands clasped on what would have been its chest.
The detective’s headache was forgotten. Her dizziness was also forgotten, washed away by a wave of adrenaline. She didn’t scramble backward in an attempt to put distance between herself and the remains the way most people would have done. Instead, she pulled out her iPhone and began to snap picture after picture from every angle. Then she realized she had a signal, so she immediately dialed nine one one and told them who she was and what she had found.
In less than a minute, Sheriff Gray Puckett called her back. He was already on his way. Kendra could hear the ding-ding-ding of the seatbelt alarm as he climbed into his cruiser.
When he asked her why she was in that particular area—on a workday—she told him everything about being on paid leave. Kendra had nothing to hide. She also told him about going fishing and getting the feeling that someone was watching her. When they hung up, she immediately called Woody and told him what was going on.
“I was going to call you about those case files,” she said. “But I may not have too much time after all.” And then she told him what she’d found. She thought about sending him the pictures she had taken but was afraid Sheriff Puckett might not appreciate her sharing evidence before he’d had a chance to see it.
“Wow,” Woody exclaimed. “What’d you do, get so bored you just searched until you found a case right there in your own backyard? I mean if you wanted to work I would’ve driven the files over myself—”
“That’s quite enough,” she said, stemming the flow of sarcasm. “I was just out fishing when I felt this sudden certainty I was being watched.”
“Are you there alone, now?” Woody interrupted.
Kendra immediately grasped his fear. “Yes,” she said, “but I’ve got my weapon, and I’ve scanned the area, no one is around. No one alive that is.” She glanced down at what she was fairly sure would turn out to be a woman. No one ever arranges men’s remains this carefully, she thought. Men’s remains almost always show evidence of sudden violence, gunshot wounds, bashed in skulls, shattered bones. These remains appeared to be posed, right down to the odd placement of the thigh bone on top of the victim’s ribs. Other than that, there were surprisingly few signs of violence about the remains at all.
“I’ll be right there,” Woody said.

#3
He hadn’t been able to clean the bones completely. Even with the help of chemicals there had been a fair amount of meat left, but that was okay. He’d loved imagining how they would look after being in the ground for a while. It was only that one femur that he needed clean. So he could hold it. And carve it.
That thought, that imagining, had kept him in check for years, right up until Candy had forced him out of “retirement” with all her baby talk.
And now that he had brought his best girl back into the light—into the land of the living, so to speak—he was delighted he hadn’t been successful in stripping her of her birthday suit completely. For the last few days, he’d found himself nearly salivating at the thought of uncovering the mysteries that lay beneath the soil where each of the others was buried.
He pushed up the sleeve of his shirt and looked at the numerical tattoo on the inside of his wrist. Joey. He didn’t look at the tats on his upper thighs. They were much more difficult to see; they blended in with the old cut-scars perfectly. Thankfully I made a precise record of each burial. I suppose my subconscious knew I would need to find them again, someday. He rolled his sleeve back down.
Ommm.
He straightened the tassels on the cushion. They had to hang perfectly straight or his OCD wouldn’t let him concentrate. The he got up and straightened the cords hanging down from the open blinds, and at last, the memories left him, and true meditation began.
Ommm.

The Giveaway is being hosted on Ann Swann's Blog.
Sign up for her newsletter and the winner will be picked
randomly on Valentine’s day: http://www.annswann.blogspot.com/